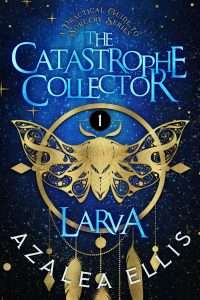 Not the kind normal people complain about.

The kind that makes Percy look up every time he passes under a balcony, just to make sure no potted plants are plunging toward his head. The kind that makes him carry a second pair of shoes everywhere he goes, ready to switch out when the first get soiled by dog poop. The kind that he trains his cardio and reflexes to deal with, so that he can jump out of the way of runaway carriages and escape from unprepared muggers who haven’t kept up with their daily jogging routine.

But when he finds himself the owner of a suspicious talisman, Percy’s luck changes.

The chance to live a normal, low-key, and predictable life, the kind some people might call “boring…” it’s heavenly.

But then strange coincidences begin to converge around Percy.

Somehow, he stumbles into “interesting” situations, and must flail, fumble, and bluff his way out of them. And if in the process, he accidentally foils some evil plots and coincidentally saves some innocent citizens…that doesn’t make him a vigilante. He is not interested in fame, fortune, or thrills.

Any evidence to the contrary is just a coincidence. An accident. A stroke of bad luck.

Why won’t anyone believe him!?

You’ll love this comedic fantasy story because of the hilarious misunderstandings and the wonderfully unfortunate Percy, who always manages to flail his way to victory. Even when he doesn’t want to.